Is scheduled to perform an intimate setting on the:

Tickets On Sale to General Public: Friday, January 13th @ 10 am at SanJuanOutpost.com & Seatgeek.com

Introducing "a decidedly more country sound" (MusicRow), Chris Lane is launching his next chapter with over 1.4BILLION on-demand streams and three #1s to date - platinum "Big, Big Plans," 3X platinum "I Don't Know About You," and platinum "Fix." After a spree of releases in 2021 and 2022, Lane's catalog has expanded with hits like latest collaboration "Dancin' In The Moonlight" with Lauren Alaina, "Howdy," "Stop Coming Over," "Summer Job Money," "Fill Them Boots," "Ain't Even Met You Yet," HIXTAPE: Vol. 2 smash "Small Town On It" with Scotty McCreery, and DustinLynch duet, "Tequila On A Boat." The Kernersville, N.C. native has appeared on the Macy's Thanksgiving Day Parade, TODAY, The Bachelor, The Tonight Show Starring Jimmy Fallon, Late Night with Seth Meyers and CONAN, and was featured in PEOPLE's 2019 Sexiest Man Alive issue. He's scored nominations at the iHeartRadio Music Awards, ACM Awards, and Radio Disney Music Awards. Lane just wrapped his headlining Fill Them Boots Tour, will join Kane Brown for part of his international Drunk or Dreaming Tour this fall, after previously sharing the bill with A-list acts like Florida Georgia Line, Brad Paisley, and Dan + Shay.

A limited amount of VIP tickets are available for $75.00

The Backyard Stage setup at The Outpost is a smaller capacity, more intimate setting so fans can get upclose and personal with the artists.  This is a much more limited capacity setup than the full Outpost larger field setup. 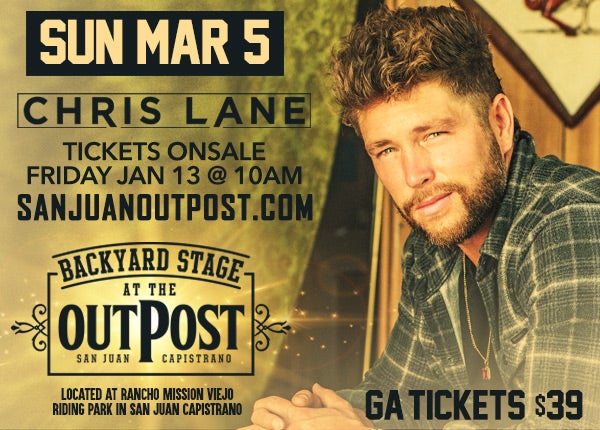 Backyard Stage at The Outpost